MICHELIN FOR THE NEW FERRARI 296 GTB

BESPOKE TYRES FOR AN EXCEPTIONAL CAR

As one of the world’s foremost luxury and performance car manufacturers, Ferrari has spent 75 years constantly pushing the boundaries of road-going sports cars. Michelin has been developing tyres for the company for nearly 50 of those years. The exacting standards demanded by Ferrari have required extensive collaboration in order to provide innovative solutions. Michelin has risen to this challenge by pooling its cutting-edge technology along with skilled engineers, wheel assembly expertise, measuring technologies and a passion for performance. And then there is also a dedicated team of test drivers that helps ensure expectations are exceeded.

The Ferrari 296 GTB is a perfect example of the Ferrari-Michelin collaboration at its finest.

Michelin has been chosen by Ferrari as an official tyre supplier for its new 296 GTB. As a result, Michelin will supply two different tyres for the car – the MICHELIN Pilot Sport 4 S K1 for predominantly road driving, and the road legal MICHELIN Pilot Sport Cup 2 R K2 for drivers wishing to push the limits of their car on track. With the launch of each new model, Ferrari tops the performance of the previous generation. Michelin shares the same philosophy and has been taking up the challenge alongside the car manufacturer for many years, designing special made-to-measure tyres.

Performance
For such an exceptional car, tyre performance is a lot more than merely a functional aspect. In the quest for ultimate performance, it is a determining factor, providing safety, precision and driving pleasure while being perfectly tuned to the vehicle's style.

A specific development
The Ferrari 296 GTB tyres were specially designed in a joint project with the Ferrari teams, and they are identified by Ferrari's own marking with the ‘K’ symbol on the sidewalls of the tyres. Bespoke design was the only solution to achieve the performance levels demanded by Ferrari.

The Michelin teams were involved right from the start of the project from the moment the technical specifications were defined. It took four development cycles and 18 months to design the tyres which are now approved for sale. The use of highly advanced, cutting-edge simulation tools was an important factor. They enabled a significant reduction in the environmental footprint of the project due to the manufacture of fewer prototype test tyres, while also reducing the number of physical tests and development time. The simulator also enabled the tyres to be fine-tuned for the vehicle with great precision.

Two tyres, two types of usage
Michelin has developed two innovative components and two special technologies to create two tyres with very different uses and has done so under the Group's all-sustainable strategy:  reduced use of raw materials, lower rolling resistance, reduction in the number of tyres manufactured and the number of physical tests carried out. 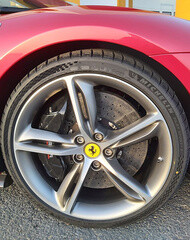 Recognized for its performance on road and also suitable for occasional circuit use, this tyre gives the car an excellent balance between grip, control and driving pleasure 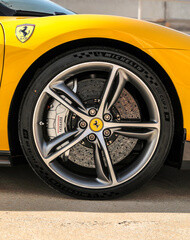 These two tyres use innovative technologies developed by Michelin:

Commenting on the project, Hervé Charbonnel, MICHELIN tyre development engineer on the new Ferrari 296 GTB said: “It was a challenge and a great adventure. The demands of the Ferrari engineers led us to use the best of our technology to develop the special MICHELIN Pilot Sport 4 S K1 and MICHELIN Pilot Sport Cup 2 R K2 tyres. Thanks to our know-how associated with the use of simulation techniques, we were able to push the limits of grip with a new optimization of the tread, while providing precision and the sensations of sports driving that are such crucial characteristics of Ferrari.”

When it comes to developing high-performance tyres, they use their expertise to select the best technologies and materials as a function of the individual characteristics of each car model, thereby ensuring superior performance and ride comfort, and a truly unique driving experience!

Over 50 years of collaboration
Michelin has been developing tyres for Ferrari for over 50 years. The 1964 Ferrari 275 GTB was originally fitted with MICHELIN tyres.

In the last 20 years, Michelin has been present as Original Equipment tyre supplier on a large number of Ferrari models:

Ferrari models exclusively fitted with MICHELIN tyres at the factory:

You are using an unsupported web browser
You are using a website browser that is not supported by this website. This means that some functionnality may not work as intented. This may result in strange behaviors when browsing round. Use or updgrade/install one of the following browsers to take full advantage of this website